The 18650 and the 26650 rechargeable battery types are used in multiple applications, from flashlights to vapes, laptops, and even electric vehicles. Despite this, most people wouldn’t realize, as the batteries are often contained in a casing of some kind.

The 18650 and 26650 batteries are popular because of their long life, the ability to be recharged hundreds of times, and the high power output they provide. Both battery types use lithium-ion, originally developed in the 1970s.

Let’s dive a little deeper to find out which battery is best.

26650 vs. 18650 Battery: 3 Differences to consider before buying Batteries for your Electric Applications?

As we mentioned, both the 18650 and 26650 batteries use the same technology internally. In this section, we explore some of the more significant differences between the two.

We measure battery capacity in mAh. You can buy a 18650 battery from around 1200 mAh to 3600 mAh capacity, while 26650 batteries are available with up to 6000 mAh. In simple terms, the higher the capacity, the longer the battery will last before it needs to be recharged. As with many things, the claims that manufacturers make for their battery capacity may not reflect reality! This is particularly true of cheap copies, which may only provide half or even less than the stated mAh capacity.

On the side of the battery, you may see something similar to this:

Ultimately, it’s the capacity of the battery that determines the amount of power it can supply. Therefore, if you want a battery that lasts for a long time on a single charge, go for a higher mAh.

If the item you are powering with the battery draws a lot of power constantly, then the battery life will be shortened. On the other hand, a battery that is operating at lower discharge rates and is recharged regularly will last much longer. For this reason, the same battery used in different tools could last for very different periods.

Based on their voltage and current outputs, yes, the 18650 and 26650 batteries are interchangeable. However, the two battery types are very different in size.

The 26650 has a much greater diameter, so it will not fit in items designed for the slimmer 18650 battery. A 18650 battery will fit in a compartment designed for a 26650 battery, but you will most likely need a sleeve to hold the battery firmly.

This is a matter of great discussion in online forums, and there are several reasons why it’s not a simple yes or no answer.

The 18650 battery has been available for decades and has received substantial development, whereas the 26650 is relatively new. For this reason, an excellent quality 18650 will be better than an average 26650 battery.

While the volume of the battery casing itself has increased by almost half again, the battery’s capacity is not always improved by the same proportion. This is partly due to the technology used and the way the cell’s internal components are arranged. The 26650 are often designed for a higher discharge rate, with a reduced total capacity. This creates more heat, and therefore, the battery cells are bigger and have more space around them.

So, in short, buy the battery that offers the power output you need and fits your item’s battery compartment. 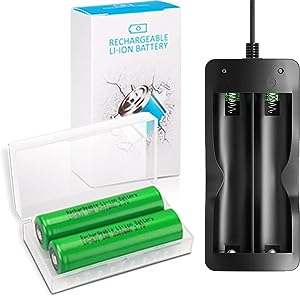 18650 batteries last a decent length of time considering they are rechargeable. Keenstone charger works very well and fast recharges your 18650 batteries to help save money.
Check Price at Amazon

The supplied batteries are a 3200 mAh capacity, with a slow discharge rate, making them perfect for occasional use. After 12 months, the batteries should retain around 80% of their initial charge.

The Keenstone multi-battery charger offers two charging slots and comes supplied with eight batteries. It can charge a wide range of battery types, including the 18650. 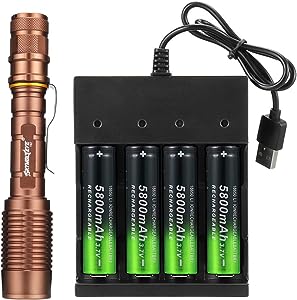 A handy flashlight, USB Charger, and great 5,800mah batteries are what you will get when buying this 18650 battery & flashlight. With $20, this set totally worth its price.
Check Price at Amazon

You are supplied with four high capacity, 5800 mAh 18650 batteries, suitable for multiple uses, along with the flashlight. To ensure your flashlight is always available, you will also receive a charger that accepts a wide range of battery types.

If you are looking for a great tactical flashlight, complete with 18650 rechargeable batteries, then the Tokeyla Full Metal could be perfect. The flashlight is made from durable aluminum, water, and shock-resistant and offers five lighting modes. 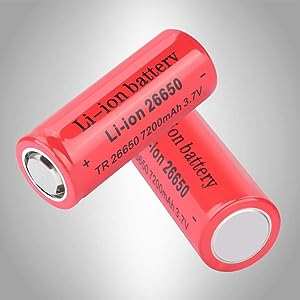 RBSD is a new brand, but with not many options available for 26650s nowadays, this high-capacity battery is a solid choice for low to electronic tools: flashlights, vape mods, etc.
Check Price at Amazon

With 500 recharge cycles, these batteries should offer a long service life, making them worth the premium price. 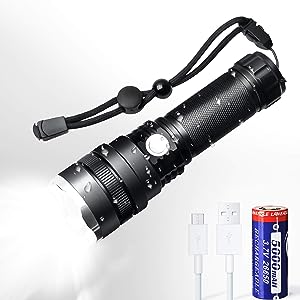 RENOOK flashlight has a powerful beam with an adjustable focus feature. The battery life of rechargeable 26650 batteries is excellent as it can stay charged for a whole month. Worth the price!
Check Price at Amazon

The high-power 26650 batteries supplied with this set will hold their charge for months without recharging. When in use, the flashlight will give you hours of good light.

By choosing the RENOOK, you will get a good quality water-resistant USB flashlight, a battery charger for multiple battery types, and a 26650, 5000 mAh battery.

The flashlight offers 1200 lumens, which is ideal even for camping, hiking, or keeping in the car as an emergency light because it covers a large area and is very bright. 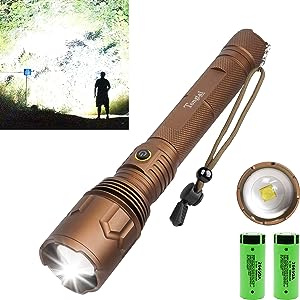 Each of the two supplied 26650 batteries has a capacity of 5000 mAh, giving plenty of life, even when the torch is in a high-power setting.  The batteries can be recharged through the flashlight USB port, so a separate charger is not required.

The Tongtai TacticalFlashlight offers a massive 90,000 lumen, using its 26650 rechargeable batteries to significant effect. The torch is waterproof, provides five modes, and has a zoom function.