Optima is a well-known manufacturer of batteries for all kinds of vehicles. They are also a company that has focused on creating a superior battery charger in recent years.

Today, you can buy two types of battery chargers from Optima, the Digital 1200 and the Digital 400.

Optima 1200 is the larger of the two and can recharge a battery three times quicker than the 400 can.

But the 400 does come with a mounting bracket so that you can keep it within easy reach of your vehicle.

But which of these two battery chargers is the right one for your needs? We are going to take a closer look at each below.

Digital 1200 or Digital 400 – What to consider when making buying decision?

You need to consider a few things to help determine which battery charger is best for your needs.

Is it compatible with your battery chemistry?

The first one is to make sure that the charger you select is compatible with the battery’s chemistry you want to charge. Failure to buy the correct charger means not only will it fail to charge the battery but can also result in it becoming damaged.

Can it supply enough power in the time you want?

Secondly, look to see if the battery charger can supply enough power to charge the battery in the time you want. For example, if you need to recharge a 12-volt battery with a rating of 62 Ah, it will take around 12 to 24 hours using the Digital 400.

However, if you were to charge the same battery using the Digital 1200, it would take approximately 3 to 6 hours.

Is it compatible with the power supply voltage?

Finally, look at the voltage compatibility, as you need to make sure that it matches the power supply voltage. Not only could it lead to causing damage to the battery, but also to the charger and even electronic devices in your vehicle.

It is also best to avoid buying any battery charger that doesn’t tell when charging of the battery isn’t complete. Any additional current into the battery could quickly ruin it.

Both these come with an LCD gauge showing you when the battery is charging and when done.

There are plenty of places online where you can learn more about the pros and cons of each of these types of Optima battery chargers. There are numerous vehicle forums where people openly discuss these items.

It is also worth looking at any reviews left by customers who have purchased these chargers through Amazon. So why not take a look so you can determine which of these best suits your needs.

Key Things in Common Between Optima 1200 and Optima 400

They differ in many ways, but there are several key features that both of these Optima battery chargers have in common and which we look at below.

Digital 400 and Digital 1200 use the same six fully automatic charging modes. Each helps to ensure that your battery gets the right amount of charge and helps to keep it working for longer.

Can be used to charge all types of 12V batteries

Both these battery chargers by Optima can charge 12-volt batteries. Not only can they be used to charge Optima batteries but also other types of traditional and AGM 12-volt lead-acid batteries.

Ability to charge a battery with only 1.25 volts

This feature allows bringing back the healthy life of a battery even when not in use for 30 days or more. These chargers can recondition a battery every 30 days so preventing sulfation from occurring.

It provides for ambient air temperature compensation when a battery is charging. It controls the output from the charger, dependent on what the external temperature is.

Here we look at the main differences to consider when deciding which Optima battery chargers to buy.

The amperage will determine how fast a charge can supply power to a battery. Chargers with a higher voltage and more significant current will charge a battery quicker.

Unique features of Digital 1200 and Digital 400

Price: Which is cheaper?

However, suppose you buy an Optima battery while purchasing the Digital 1200 charger from them. In that case, they add an additional year’s warranty cover on the battery.

As discussed above, we can use both of these Optima battery chargers to charge all batteries made by this company. We can also use them to charge other manufacturers of AGM lead-acid batteries.

The kinds of vehicles on which the Digital 400 should get used are small to medium-sized cars with small engines, ATVs, and motorcycles.

The Digital 1200 should get used on batteries in large vehicles, marine vehicles, tractors, trucks, RVs, and power sports vehicles.

Who Should Buy The Optima 400? 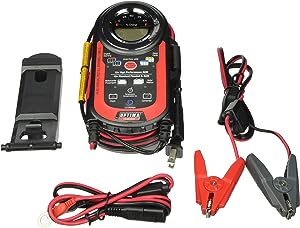 For those of you who are on a limited budget and will be using the charger for recharging a battery in a small or medium-engine size vehicle, then this is your best option.

Also, if you are looking for a compact battery charger with some outstanding features, you should get the Optima Digital 400. 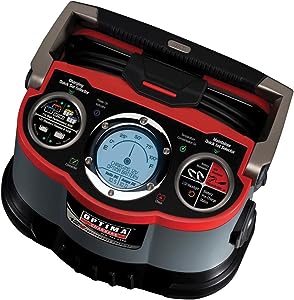 Otima 1200 charges faster than competitors with up to twice the output.
Check Price at Amazon

If you are looking for a battery charger that will recharge the battery in your vehicle quickly, the Optima 1200 is a great choice. Not only does it charge faster, but it will also maintain your battery once it has completed the charging process.

Also, it comes with the additional feature that it will periodically exercise the battery. Meaning that it will alter the battery’s charge profile, helping to enhance the useful life of the battery it is charging.

Also, should at any point, should power to the charger be cut off, once power gets restored, it will automatically start recharging the battery.

Hopefully, the information provided above will help you determine which of these two Optima battery chargers is your best option.

Tim has over 8 years of experience in car charging system repair. By day, he works as a passionate car mechanic at a garage in Colorado. By night, he's a battery blogger who creates useful content that cuts down on his reader's car repair costs.