Noco is a very well-known name in the battery charger and jump-start battery pack sector, and they have a variety of models. In this short review, we compare their base GB20 jump starter with the following two larger models.

Our review picks out the essential differences between the jump starter models and suggests which one you should buy.

Since the three products on the review are all made by Noco, you’d expect significant similarities.

The three Noco jump-starters overall look is identical, of course, and they look rugged and purposeful.

All three feature the black and grey color scheme synonymous with Noco products, making them instantly recognizable. The front panels of them all are the same except for minor layout and name differences.

Again, the three Noco jump starters offer the same range of features. You’ll find a USB In, a USB Out, and a 12V Out port on each of them. Each product has an LED light, although the power rating varies.

Ont e front panel, each has a battery level indicator and a manual override button.

In addition to jump-starting flat car batteries, each Noco model can be used to recharge your USB devices, such as smartphones or tablets.

As you would expect, the three models also offer the same safety features. These include reverse polarity checker and spark-proof connection technology.

Inside each Noco is a powerful lithium battery designed to give a high peak current at 12 volts. This means they can all jump-start vehicles with 12 volt charging systems, and just the maximum output is different.

We’ve briefly looked at similarities between the Noco GB20, GB40, and GB50, so now a more detailed look at the differences. While they are all designed to jump-start a car with a flat battery, they are aimed at different markets. There is little point in buying the most powerful version and spending more money when you own a car with a small engine.

There is not much to differentiate the three models based on features and functions, as you can probably guess. All three feature an LED light, but while the GB20 and GB40 versions offer 100 lumens, the GB50 light is double the brightness at 200 lumens.

The GB50 also scores higher on the number of jump-starts it can manage from a single charge. The GB20 and GB40 offer an impressive 20 attempts, while the GB50 gives ten more at up to 30 starts.

All three Noco models look almost identical, except in size. To accommodate the larger batteries, a model’s size and weight will vary with the power offered. In this case, the GB20 and GB40 are identical in weight and size.

But the GB50 is almost an extra inch longer and slightly larger in width and height. Not a huge difference, but it may matter if you have a particular cubby hole where you want to store the jump-starter.

What vehicles each jump-starter will work on is one area where the three models differ significantly. This is purely down to the battery’s size and the peak current it is capable of providing. Although all three are designed to jump-start cars with 12 volt electrical systems, the engine’s size is the determining factor.

The smallest here is the GB20, with a peak current of 500 amps. This is still an impressive output and will allow you to jump-start gasoline engines up to 4.0 liters. Noco doesn’t recommend the GB20 for diesel engines.

Next up is the GB40, with a peak current rating of 1000 amps. Noco suggests this is suitable for up to 6.0-liter gas engines and 3.0-liter diesel engines.

Both the GB20 and the GB40 have identical internal battery capacities of 24 watt-hours. However, the GB40 has double the peak current, at 1000 amps, compared to the GB20’s 500 amps.

The largest Noco jump-starter on the review is the GB50, with an internal battery rating of 36 watt-hours and a peak current of 1500 amps.

As you would expect, all three models have the same one-year manufacturer’s limited warranty.

Which Noco Model Should You buy? 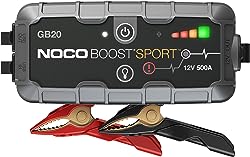 4.6 / 5
Noco GB20 is all you need when going far from home with just $80: Up to 20 times of jumping vehicles per charge, LED lights to jump your auto in the dark, USB charge functions for phone, tablet, or other electronics charging.
Check Price at Amazon

The GB20 is the baby model of the range and aimed at the small car owner. If you own a small runabout with a gasoline engine smaller than 4.0 liters, this is all you need. 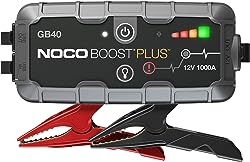 4.7 / 5
Noco Gb40 can revive the dead batteries of most vehicle models (cars, trucks, lawn tractors, boats, etc.) in mere seconds with an instant jump. This little device will save your life for those emergencies on the road.
Check Price at Amazon

The midrange GB40 is probably the one most people should buy. It can start gas engines up to 6.0 liters and diesel engines up to 3.0 liters, covering a vast range of models. It is good value, being only slightly more expensive than the base model, GB20.

4.7 / 5
If you need a lifesaver for your large engine vehicle batteries, pick up Noco GB50. It is the most powerful version with the highest number of jump-starts it can manage from a single charge (30 times).
Check Price at Amazon

If you need real starting power for a large engine, then the GB50 could be perfect. It can start up to 7.0-liter gas and 4.5-liter diesel engines, so there are very few that will stump it.

Can the jump starters be used on other 12 volt vehicles?

Yes. Although we specifically mention cars in the review, the jump-starters will work on any 12-volt electrical system. They are ideal for ATVs, motorcycles, jet skis, and many other vehicles. Just make sure you get one powerful enough for the engine.

Will a jump-starter charge my battery?

No, these models are only designed to give a high current for a short time to get your engine started. It would be best if you then charge your battery with a standard battery charger.

How long are the starter cables?

In all cases, not just Noco models, the starter cables are pretty short, around a foot long.

In most cases, this won’t be a problem, but if needed, Noco recommends users either using remote jump-starting posts or connect the positive lead to the positive terminal and the negative lead to a reachable common ground.

Can you use a jump starter with all battery types?

Should I leave the jump-starter plugged into the mains socket to keep it charged?

This isn’t a good idea. Once charged, the internal battery pack will hold its charge for around a year, although it would be a good idea to top up the battery after six months.